THE ORIGINAL HOME
Meera and her active family of four were in search of a new home in the South Bay to call their own, and after three-and-a-half-years with no success – having sifted through over 1,000 listings and visited nearly 30 in person – they finally found the one. “We walked in thinking, ‘We’ve seen so many homes. This is likely not it,’ Meera says. They walked out, however, with the same unexpected realization: ‘Oh my God, this is the one!’, they told Dwell in fall of 2021.

The clients fell in love with this unique circular house and initially planned a modest remodel. The original home, built in 1965, was one of a few similarly shaped homes built in California in the 60s. Soon after moving in, the family recognized the inefficiencies of their new home – low roof eaves awkwardly obstructed the otherwise spectacular views. The original structure, referred to as the “doughnut house,” had an open-air courtyard in the center. It “was really interesting and very awkward at the same time,” said Steven Stept, Partner-in-Charge. The public living areas faced the private wooded hillside, while bedrooms opened onto sprawling, exposed views of Silicon Valley.

“’I have a soft spot for preserving what’s there,’ says Meera. ‘For a while, it was just a finishes (updating interiors/exterior finishes) project.’ However, once things started failing in the older home, the project morphed into something bigger. ‘At that point, we thought, ‘We should probably do it right, but we can still pay homage to the original design,’” she told Dwell.

VISIONING
“From day one, we thought, ‘What a fun opportunity to try to see what we could do with a circular house,’” Stept says. “We were excited by it.”

The clients are a family of four, with two middle school aged children. Meera is an avid cook and baker, and wanted food, cooking, and therefore the kitchen to act as the home’s metaphorical and physical center, and also needed to accommodate the cooking lessons she hosts for family and friends. Meera, a talented designer herself (a Principal at AP+I Design), was excited to engage alongside our team, and later, worked to select all the interior furnishings and collaborated on the project’s finish selections.

Spiraling outwards from the kitchen, the updated floorplan aspired to reconfigure the original structure’s public and private spaces in a more logical manner – nestling the primary suite on the opposite side of the home, facing the tree grove, and orienting the great room, kitchen, and outdoor living towards views. The clients envisioned living on one level, so the updated plan places their desired programming on the main level, while the existing footprint allowed the design to accommodate lower ‘bonus’ spaces, like a home office and an extra in-law suite with direct level access to the arrival court.

“It was very exciting to develop a precise plan that respected the tangent points of the circular shape, which all referred back to the central core – the kitchen” Anjali Iyer, Project Architect, told Enki Magazine.

The lot’s size and steep slope meant that if the home was built by today’s regulations, it would max out at a compact 1,020 square feet—making it much more beneficial to work with the existing design. After tracking down the original building permit and negotiating with the city, the team eventually got approval for a comprehensive redesign—as long as they didn’t exceed the original permitted square footage (Dwell).

A challenging build with atypical geometry on a steep slope required extreme creativity from David Toews, BayWest Builder’s Superintendent, who led the project’s construction through a variety of unique challenges. 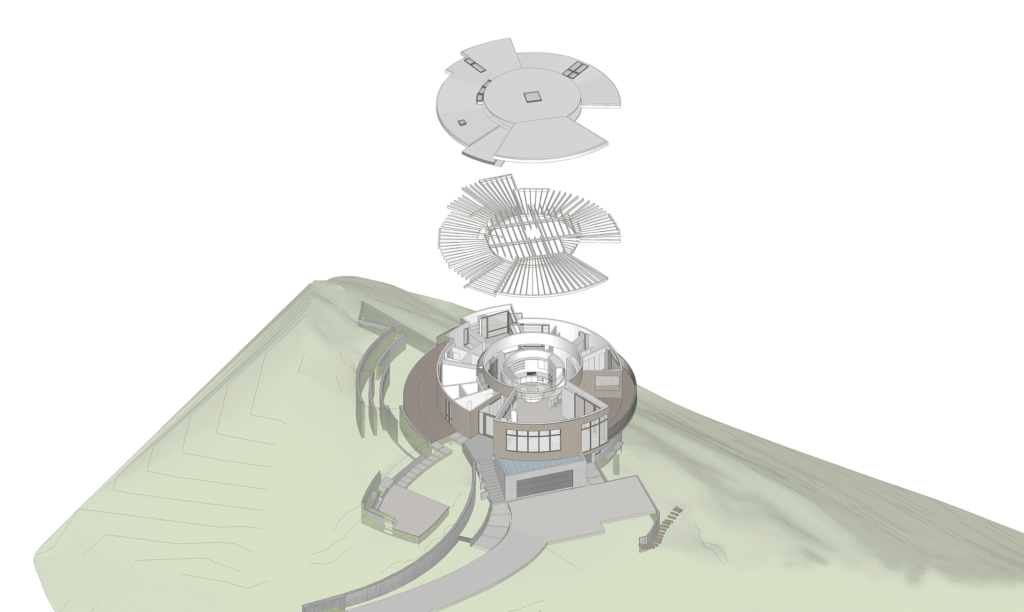 Because of the circular plan, David stressed that geometry and strict calculations were important from the beginning, suggesting that the house needed a compass to guide its construction. Viewing the building in layers, starting from the foundation all the way through framing and steel work, he expressed that exacting precision in each phase would result in the most successful project. After inspecting the plans prior to starting construction, he immediately referenced a past project, the Sundial Bridge in Redding, which inspired ‘The Tool’ – a 16-foot-tall by 45-foot-long compass. Its function was to properly measure the circumference of the house during the construction of foundation and walls, helping the team keep track of the plan’s vectors and ensuring each wall lined up with its counterpart. The home’s plan carefully and precisely radiates out from its exact center of the kitchen, where the compass was anchored. Today, you can find the compass base, now serving as a front door stop, in the entryway of the completed house.

“We custom designed steel inserts in the concrete floor, and the decks boards were cut in a tapered shape to respect the curved geometry. The process was thoroughly enjoyable as we had to question and reinterpret each detail in our toolkit that would have worked for an orthogonal building. The project warranted a higher degree of collaboration between the design team, the consultants, and the contractor” Anjali Iyer, Project Architect, told Enki Magazine.

The design interprets the existing structure through a modern lens – integrating current seismic codes and updated structural work throughout the project as to stabilize the home into the existing steep hillside. To further withstand seismic disruptions, the concentric design takes biomimetic approach, “We took some inspiration from things that are naturally very strong structures,” the homeowners explain. “There’s tons of circular steel, and it’s all crossed and connected to each other. That’s a spider web.” Visually, the team took advantage of these structural modifications and smoothed previously segmented walls into pure curves.

Throughout the home, the design’s success is largely due to an unwavering commitment to the concept. “Once we took on the challenge of really respecting the circle to the nth degree, that really created the plan—and created all the details too,” says Stept.” That’s something we try to do a lot in the office, once you have a concept that’s a strong one, just don’t ever forget about it, and try to push through it all the way to the end,” said Steven Stept, Partner-in-Charge, in Dwell. 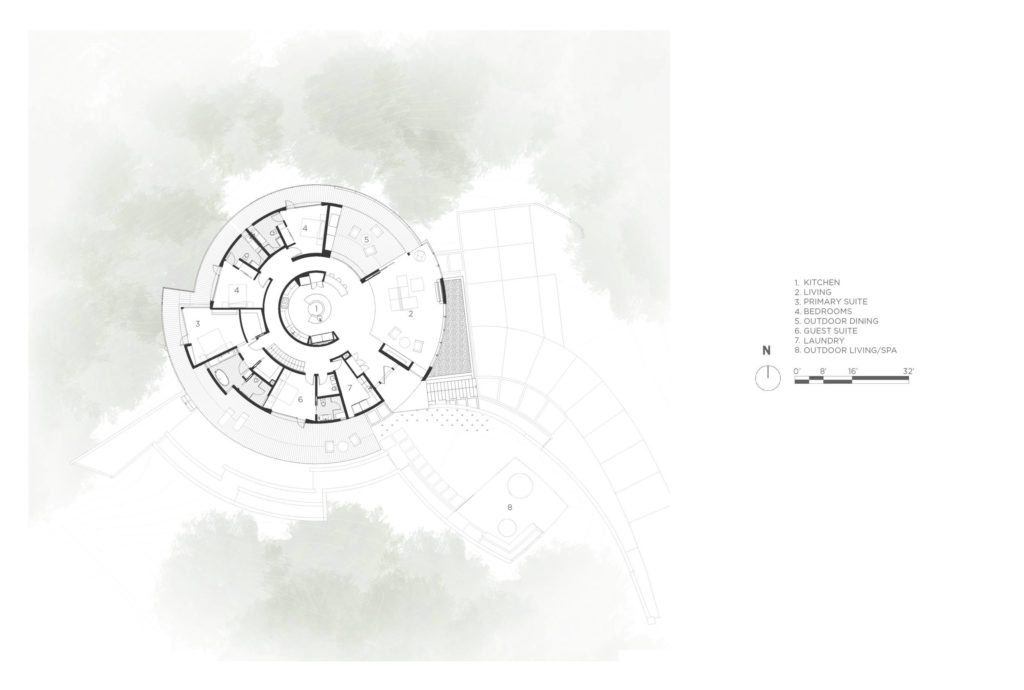 THE FINAL PRODUCT
Alongside Meera, our team selected clean and modern finishes and furnishings to invite dramatic views to the forefront – a Japanese style of charred wood siding, called Shou Sugi Ban, seamless concrete floors, crisp curved white walls, and minimalist interiors feel fresh and durable. In the kitchen, a circular skylight streams daylight into the kitchen, creating a makeshift sundial that illuminates different sections of curved casework throughout the day. A concentric hallway traces the kitchen, leading to discrete pie-shaped rooms carefully arranged to demarcate private from public spaces. An outdoor deck is strategically carved out at the intersection of the living room and kitchen – framing sprawling views. Tall, curved pocket doors vanish into the walls, asserting a seamless indoor-outdoor connection. The modest perimeter deck allows outdoor access from all the bedrooms, while curved landscape walls radiate outward and into thoughtful softscape.

“Lifting out of a polished concrete floor, the kitchen mimics the external body, embracing a cylindrical design that allows for a large island and uninterrupted flow. A small skylight hangs above, spotlighting the space and casting shadows that reveal the time of the day. Conventional solutions may favor geometry, but fortune favors the brave, and thinking outside of the box – quite literally – has resulted in a home like we’ve never seen before.” Enki Magazine, March 2022 issue.

A Bold Circular Home Radiates Outward From Its Futuristic Kitchen

A Minimalist House Stands Out in a Wild Landscape