Rather than simply a traditional house in the trees, The Treehouse was to be an organic structure, an art piece floating in the foliage of the expansive yard of this Woodside home. After completing a number of design projects, the clients were eager to push the envelope and create a structure that was equal parts elegant and functional. Suitable for yoga and meditation, but also for their children’s summer sleepovers.

The Treehouse is suspended between two 40ft oak trees in the back of the property. Structural support is provided by its thin, spindly legs that resemble stilts and give the structure a distinctly vulnerable feel. By working closely with the structural engineer, the design team was able to configure a steel support beam that runs laterally through the floor, anchoring it into the hill behind the trees. The entire structure looks vaguely off-kilter, mirroring tree trunks and matching its open build. Its exterior is made up of vertical, naturally-weathering, wood boards, incrementally spaced apart to allow the natural world inside.

To reach The Treehouse, one must first cross a ramped bridge, which lifts the visitor over a small rock wall before leaving the ground behind and ushering one directly into the trees. The structure itself extends beyond the branches of the trees and affords lightly vailed views of the creek, foliage, and lower yard, all tucked just out of view from the main house.

The design of The Treehouse was a collaboration between the architectural & structural teams, which generated a design that gracefully melds the structure and the architectural form. The designers enjoyed working outside of the normal architectural box, pushing the boundaries between “object in the trees” and “habitable space.” Unlike a traditional home, The Treehouse is simple in its logistical composition, not requiring plumbing, gas, or electrical beyond string lights for pleasant evenings, allowing our designers to focus solely on their creative impulses. Inspiration for The Treehouse’s concept was drawn from natural art pieces– woven, wooden, and “of the trees.” 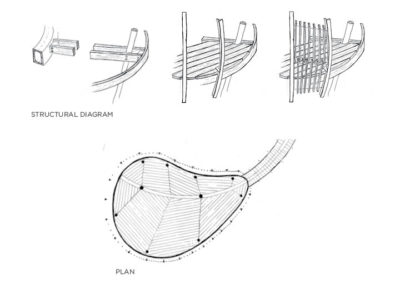 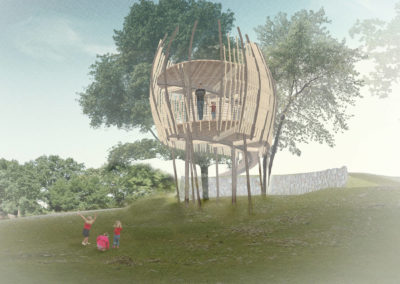 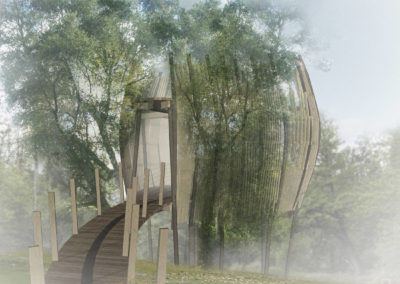 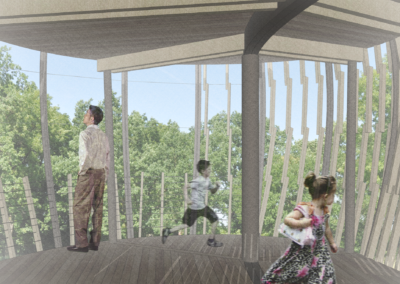