Catching up with the Client: Presidio VC Offices

When a venture capital firm approached Feldman Architecture in the hopes of renovating an office space in San Francisco’s Presidio Park, the architects faced a challenge:  How could they design offices fit for a firm based in innovation, one that both shapes and reacts to the most striking ideas for the future?  How would they create a space where the only constant is the constant advancement of the elusive cutting edge?

On a recent afternoon, the venture capital firm’s Director of Operations walked me through the architect’s solution:  a light-filled office whose materials pay tribute to the surrounding Presidio Park, fostering both calm and creativity within.  It was clear that, just as the design team had refused to view the space’s pre-existing concrete structural columns as obstacles and had instead embraced them as inspiration for the space’s organization, they had welcomed the challenge of the project as a chance for creativity.  “What comes through about the design,” she told me, “was that elements that may have been challenges were viewed as opportunities.” 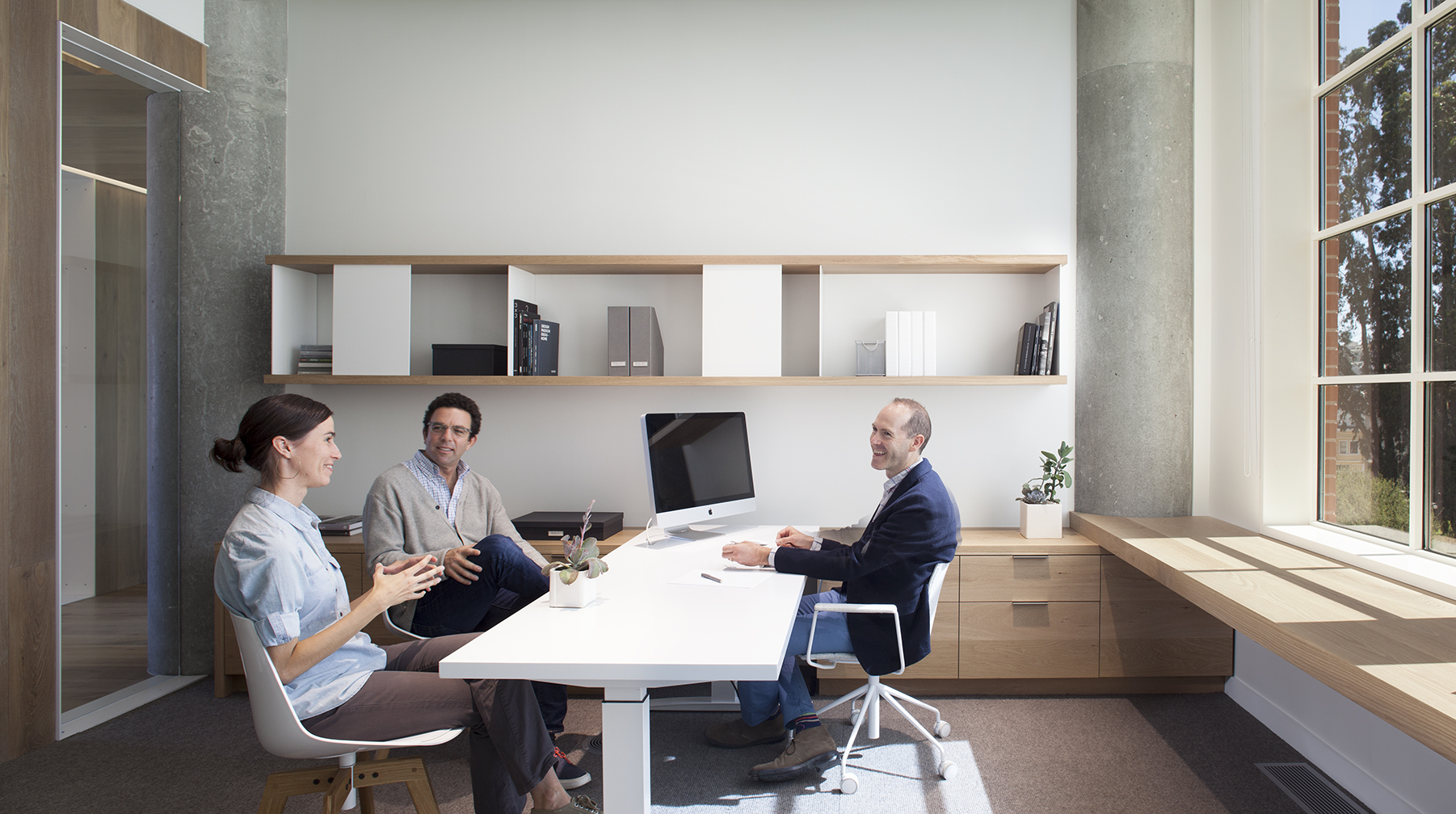 One of the office’s strengths is a profound connection to the building’s location, where ferns cluster around the trunks of Coast Redwoods and wildflowers abound in the spring and summer.   As the firm traded the dark, cramped spaces of their old offices for a space with more natural light, they were determined to create and maintain a strong visual connection with their natural surroundings.  In the Presidio VC Offices, visitors are greeted in a high-ceilinged lobby, where sunlight washes in from the surrounding Presidio Park, coating the ivy of the room’s living wall with the sheen of natural light.  In each direction, compression corridors branch off from the reception area.  Private offices line the hallways, and the large windows on their exterior walls paired with the glass doors on their inner walls allow light to flow into the offices and through them, spilling into the compression corridor at their core.  The complimentary textures of wood-paneled walls and ivy in the reception area and the trunk-like columns that progress down the office halls replicate the forest outside and its dappled glades of towering trees.  The office fosters a calm productivity, void of the frantic energy that so often settles over industrious offices.  “I love watching the look on people’s faces as they walk through the door,” the Director of Operations said.  “Our lobby is striking and vastly different from most downtown office spaces.”

While the office’s effects are immediate, she believes it takes familiarity to fully appreciate the more subtle strengths of the design: the way it captures different views from the conference rooms and private offices, or how it frames the fog hovering over and retreating from the Golden Gate Bridge in the kitchen window.  Staff members have noticed and embraced the clear visual language of the design, the dark accents repeated throughout the space, and the coherence of its palette.  And, slowly, they have added their own subtle embellishments to its warm, clean canvas.  A few pieces of art and silly décor elements personalize the space, but largely, the Director of Operations says, they allow the design and architecture to speak for themselves.

She appreciates that the office, created for hard-working, ambitious individuals, is anything but imposing.  Its simplicity invites ideas and visitors, alike, and renders the space adaptable.   For a past event in the office’s cavernous library, the firm rearranged the modular furniture to accommodate easels and cocktail tables, and, recently, they transformed the space into an intimate setting for a ‘fireside chat’ discussion.  It’s an agile space, both adaptable for weekly events and prepared for the possibility of bigger changes down the line, tapping into the timelessness of the trees outside its windows.