Catching up with the Client: Nicole on Fitty Wun

“I’m just going to sit here and enjoy the noises,” reads a quote scrawled in red marker and attributed to the family’s oldest son, one of the many funny phrases salvaged from the three boys’ childhood and preserved on the wall in Fitty Wun’s kitchen as a Christmas present to their mother.   All of the quotes are goofy, both nonsensical and honest in the way that only small children can be, but this sentence in particular stands out as appropriate for the space.  From the kitchen, I look up into a three-story atrium that stretches from the ground level entry-way, through the home’s open public spaces, to the bedrooms and quiet office above.  Ringed with a steel staircase, this cavernous vertical space is often full of the clamor of boys bouncing off the walls, running their house through cycles of chaos and control, with their mother, Nicole, presiding over the activity from its central hub in the kitchen.  “The house completely deconstructs when everyone is in it, but this is a house that my kids can’t break.  We built this house to use it,” she says. 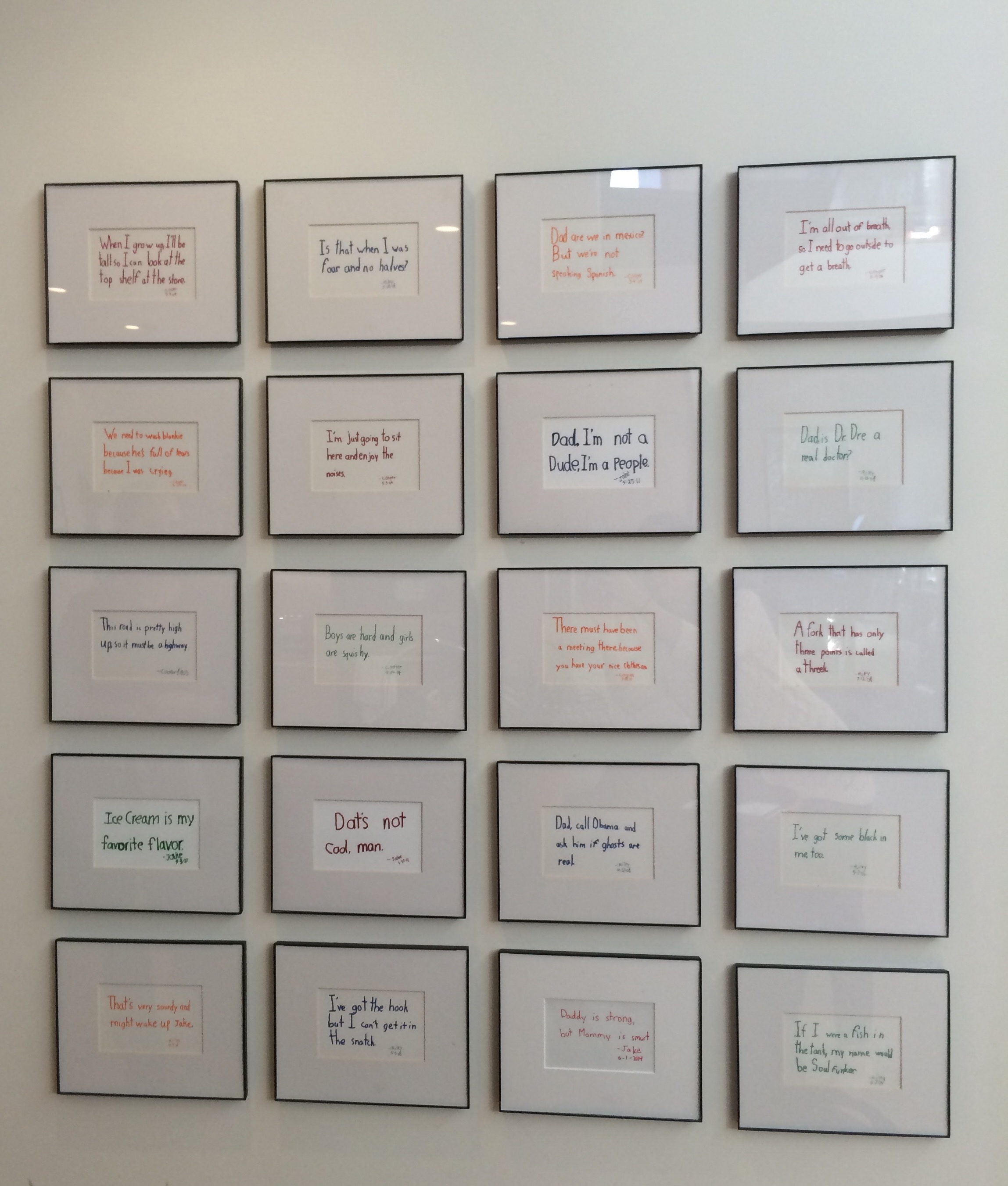 And use it, they do.  On weekday nights, the family’s oldest son camps out at the corner of the table in the dining room at the front of the house, a pile of homework in front of him; his younger brother spreads his toys across the floor of the family room; and the third perches on one of the red stools at the kitchen island, close to his mother.  “This is where the school bus drops off.  This is my corner of the world,” Nicole says of the kitchen, where she often finds herself “flitting around, cooking, and checking on homework.”  From it, she can see through the dining room out on to the quiet Cole Valley street in one direction and into the family room at the home’s rear façade in the other.  She can call up through the atrium to any room in the house or downstairs to the family den, where cartoons of baseball parks across the country line the wall.  From her “command station” in the kitchen, she is constantly visually and audibly connected to her family; Fitty Wun is first and foremost a family house. 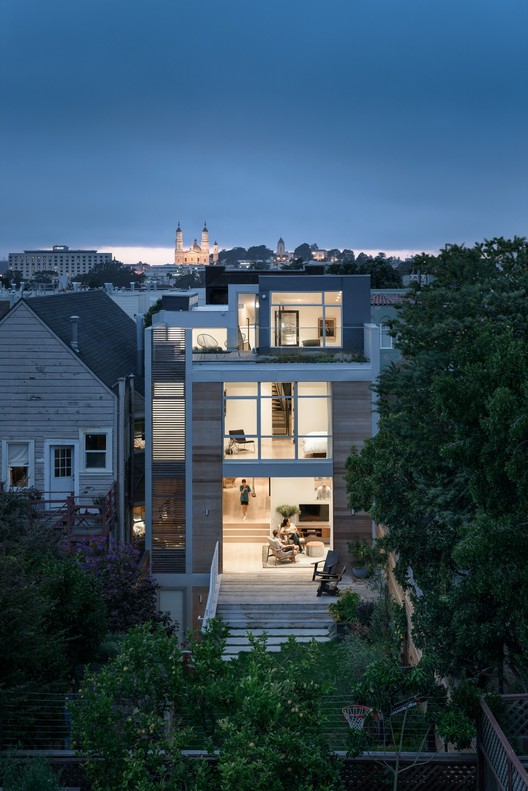 The family first purchased the house in 2006, drawn to it not for the structure itself, but for the garden space behind it.  At that point in time, the house was just one floor, and all three boys shared a single room.  There was no way the structure could accommodate the family’s three boys, two cats, one dog, and active lifestyle; they began to develop concepts for the home’s renovation.  Among them were three ‘must-haves’ that remained intact throughout the entirety of the design process, and Nicole enjoyed watching her family’s visions turn into their quotidian spaces: “The process was really fun.  There was a lot of laughing.  I miss that process – the word collaborative was exactly what it was.”

While the family knew that space in the city was a luxury, their first ‘must-have’ was an open, communal living area, which they preferred to packing in extra bedrooms or bathrooms.  Today, the kids only sleep in their bedrooms; the family prefers to live together, in shared spaces, at the center of their home.  In addition to being set on an open central space, the family was intent on putting the outdoor spaces of their home to good use.  Nicole’s favorite spot in the house is its crowning green roof, and the sliding glass doors between the living room and the backyard where the boys and their friends congregate to play basketball and run barefoot are almost always open.  “That whole concept of living indoors and outdoors?” she says, “We actually do it.”  The third and final ‘must-have’ was a quiet office that would function as a pocket of calm in an active household.  The architects responded with a floating pod that hangs above the atrium and its echoes bouncing off the walls, presiding over the activity from a quiet, removed perch.  It’s where the oldest son and his father retreat to watch The Walking Dead every week; the pod has become the residence’s “man cave” as the boys grow older.  Still, their mother insists that no one in the family ever does more than “pretend to be a grownup,” and if the house has weathered well under the weight of growing boys’ feet, the family’s sense of playfulness has remained equally intact.  “Our idea of art is superheroes and Legos,” Nicole confides. 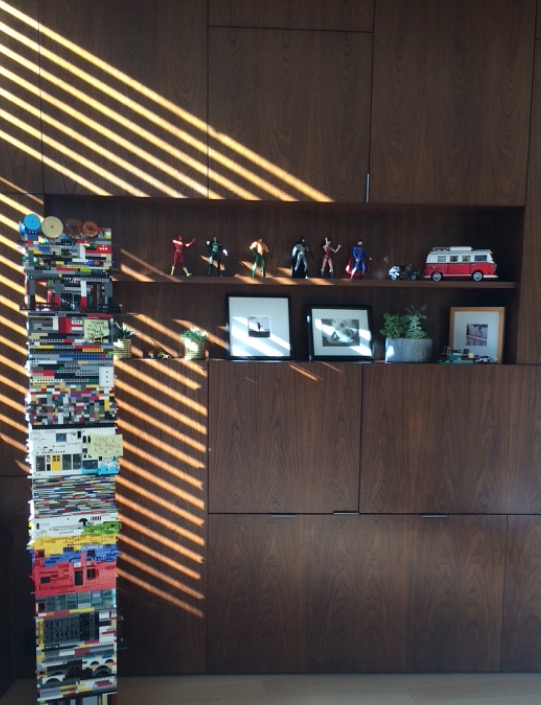 I visited the home on a recent Wednesday morning, when a rare sense of calm had settled over Fitty Wun.  The family dog napped in the sunshine, the plastic figurines that usually lie strewn across the living room rug had been tucked away, and the home’s Hallmark swing hung still and empty.  The sunlight streamed in through one side of the atrium as we climbed the stairs towards the green roof, and by the time we descended back down towards the entryway, having explored the loft spanning the boys’ bedrooms and looked out through the master bedroom’s full height windows onto the green backyard, it filtered in through a second side, bound to peek its way through each edge of the atrium’s rim before setting.  No matter how many times the sun circles and sets, though, the home doesn’t lose its everyday, Lego-laden charm, says Nicole: “We love this house every single day.”