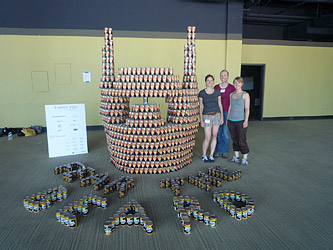 This spring, Feldman Architecture teamed up with Fulcrum Engineering to create a structure for this week’s Canstruction benefit for the San Francisco Food Bank.  The theme of the event was Spirit of San Francisco, which we took as an opportunity to celebrate the Giants’ victory in the 2010 World Series.

Throughout the Series, Giants’ fans adopted the slogan “Fear the Beard” in support of the famed pitcher, Brian Wilson, who helped bring the team to victory for the first time since 1954. Wilson’s thick, dyed black facial hair became an icon for the team’s tenacity and was the subject of one of the favorite chants among crowds leading up to the series win. The Beard continues to grace t-shirts, hats, and headlines as the Giants continue the 2011 season with high hopes.

Our representation of The Beard, which won an honorable mention at Wednesday’s award ceremony, evokes this spirit which we all experienced in the final days of last year’s World Series. We chose dark colored labels to represent the dyed black beard and shaped the sculpture to best represent the recognizable icon with the full beard, mustache, and tall side burns.  Most of the cans are beans, which also answers the Food Bank’s request for high protein canned goods.

Visitors are welcome to check out the amazing Canstructions created by several local architect and engineer firms at the Metreon on the 4th floor through Sunday, June 26th.  Further information and details on donations can be found at the Canstruction website. 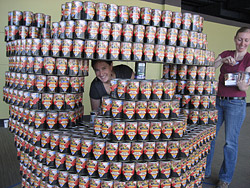 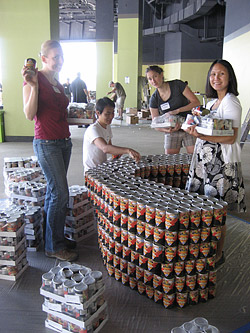