Vancouver in 3 Days: Where to Go, How to Get There, and What to Eat as an Architect in the City

After five years since our move to the US, we decided it was high time that we expand our travels beyond the borders of the country. The province of British Columbia has always held a strong allure to us for its stunning landscapes and fascinating culture. So I was thrilled when the better half planned a surprise getaway to Vancouver for my birthday.  Four days felt awfully inadequate but we decided to roll with it. A short early morning flight transported us to a very warm sultry Vancouver. The airport with its wonderful First Nation sculptures and totem poles hinted at the rich history of British Columbia. A large ‘living wall’ affirmed Vancouver’s reputation for being one of the early adopters of environmental sustainability. The Skytrain took us through the suburbia to a very urban jungle that is Downtown Vancouver. We Airbnb’ed at a condo right in the heart of Gastown, one of the historic neighborhoods that is a surreal mix of high-rise buildings and cobbled maple tree-lined streets with vintage streetlights and a historic steam clock to boot! 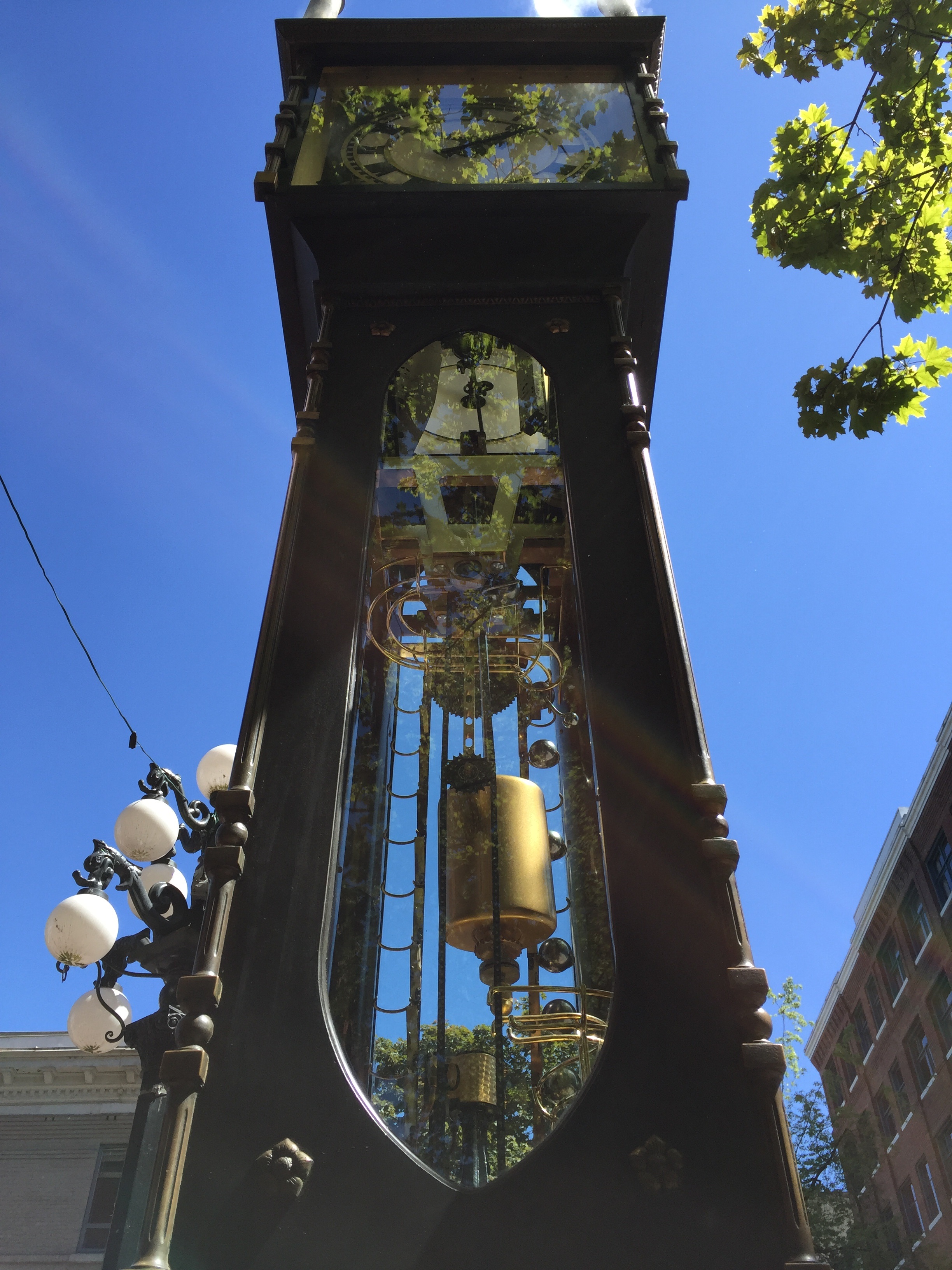 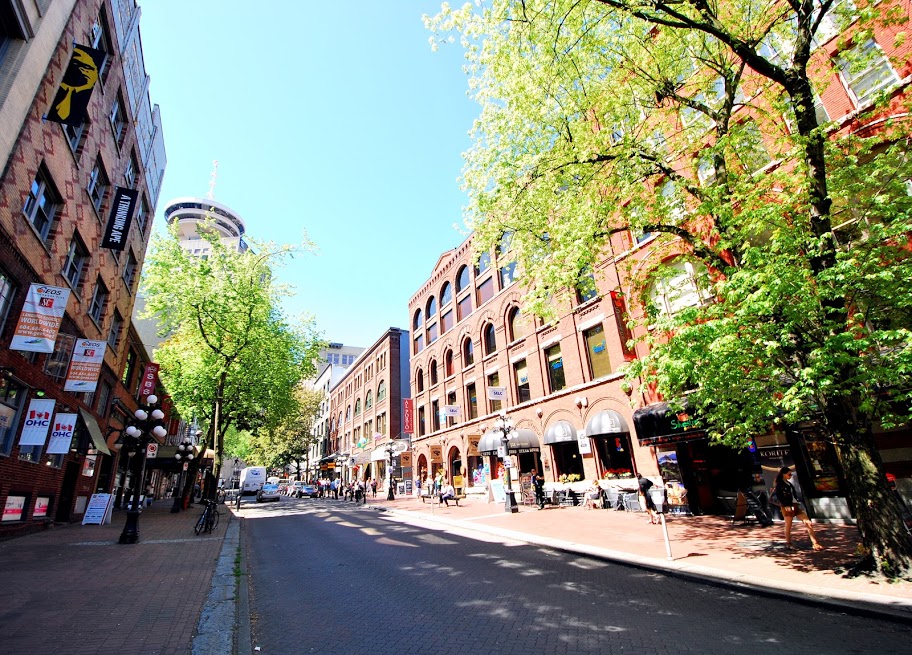 We realized immediately that this was a city where public transportation was supreme. The ‘waterfront-town’ is densely populated with a small footprint of 44 sq. miles. Across the peninsula is North Vancouver, accessible by the sea-bus and by road. We got ourselves travel passes and set out to explore our hood, Gastown by foot. We were within walking distance to the famous 17mile SeaWall that forms the waterfront wrapping around the city. One could see the snow-capped tips of the Grouse Mountain in the distance. The SeaWall starts at Canada Place – known for its iconic Sails of Light. Right next to it is the impressive new convention center – a majestic waterfront development with a six-acre living roof, the largest in North America in a non-industrial context. We hopped on a bus that took us to the famous Stanley Park. Unlike the Golden Gate Park which is fairly introverted and embedded in the heart of San Francisco, Stanley Park fingers out from the city, thus allowing views of Vancouver that change as one walks the wall. We took trails into the park at different points alternating between dense wild shaded vegetation to emerge again at the perimeter wall delighting in a different view of the city. We exited the park and headed to our pad by bus, exhausted but excited about our dinner plans. We had reservations at the popular Forage known for it’s locally-sourced innovative menu.  It did not disappoint my vegetarian palette. We strolled back home taking in the expanses of open urban spaces between the dense high rise condos. The lights had started coming on and the city glowed, draped by the ever-present shimmering water. This was a truly urban oasis where people lived outdoors than in their cramped condos. The city felt safe. 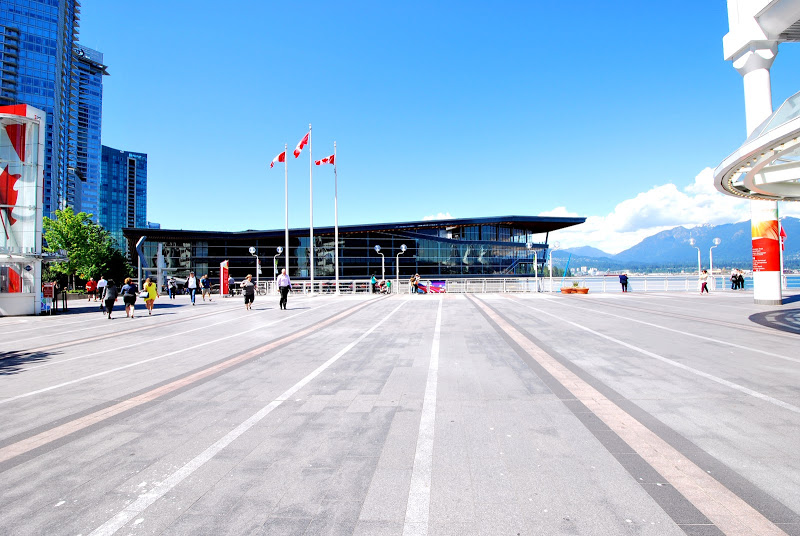 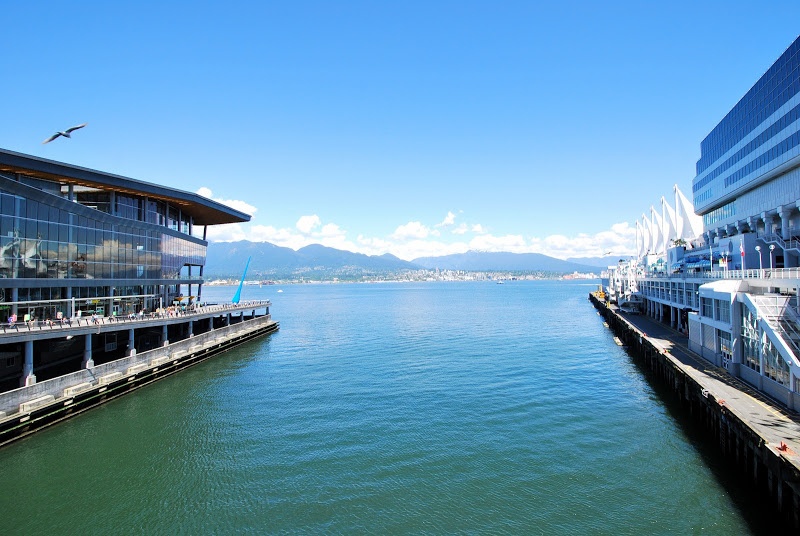 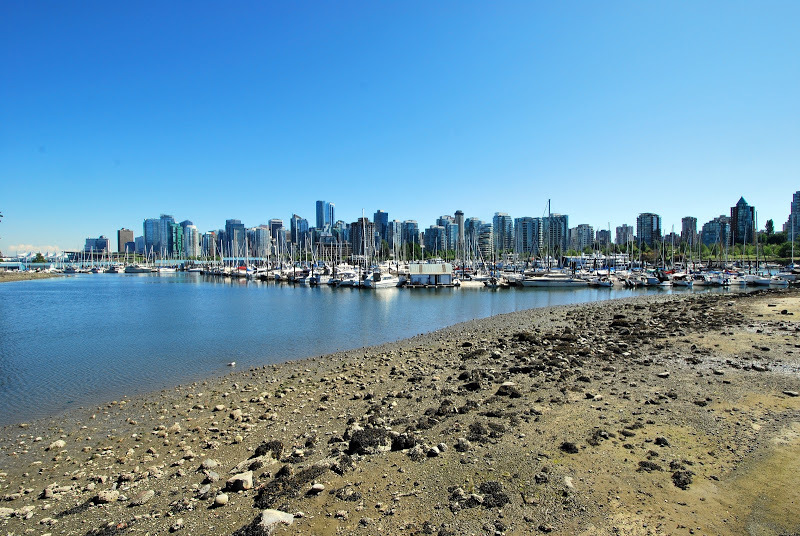 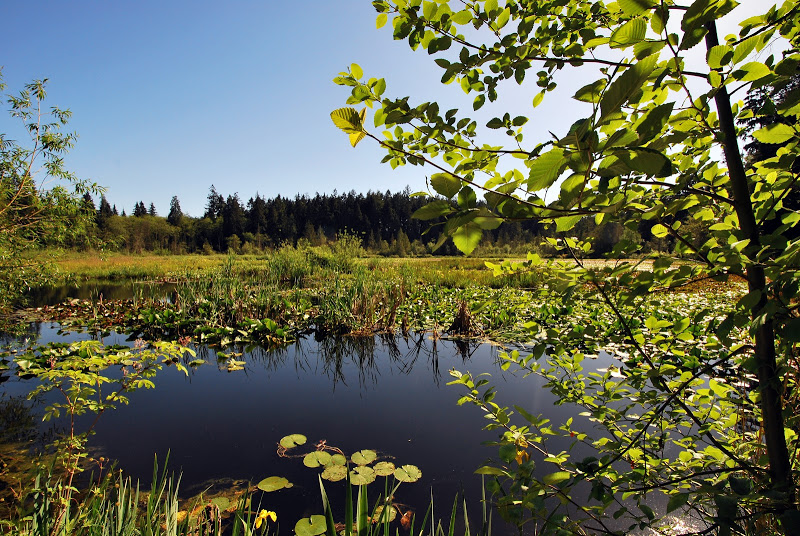 On day two, we walked to  Medina Cafe, a Mediterranean restaurant with a solid reputation for unique flavors and the best Belgian waffles in the city. We beat the long queues and got ourselves a table within the hour. Pleased with brunch, we set forth to take the sea bus to North Vancouver. We landed at Vancouver’s carnival style farmer’s market at the Lonsdale Quay – a visual treat with its fresh produce and local vibe. 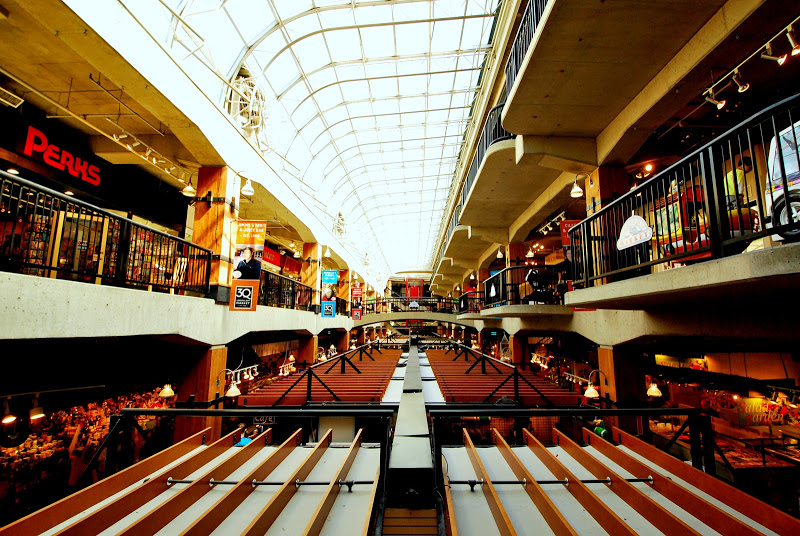 We proceeded to our next destination- the Lynn Canyon public park with its suspension bridge and miles of hiking trails. Per our host’s recommendation, we chose Lynn Canyon over the more popular touristy Capillano Suspension Bridge park. We hiked for a few hours and then took a taxi to the foothills of the Grouse mountain. The Grouse mountain is accessible only by a gondola skyride that takes you over the forest to the a chalet on top. An alternative is the daunting but highly popular Grouse Grind hike aka ‘Mother Nature’s Stairmaster’ involving 2800 odd steps through dense forest. We took the gondola — let’s say only because we were out of time. Ahem. The chalet at the top houses a few restaurants and a theater. A short hike took us to our first sighting of two rescued grizzlies that live there. They seemed very indifferent to our presence. We walked around the chalet to capture the panoramic vistas of the city across. A bus, a sea-bus and a train took us back into the city within the hour. Soon we headed out for our Italian night — to Lupo, a Vancouver icon in the entertainment district of Yaletown. Located in a charming heritage house with interconnected rooms, the menu was limited but inspired. We concluded a fabulous birthday dinner with a creme brûlée that was to die for. We walked home. The streets and landmarks were beginning to feel familiar… 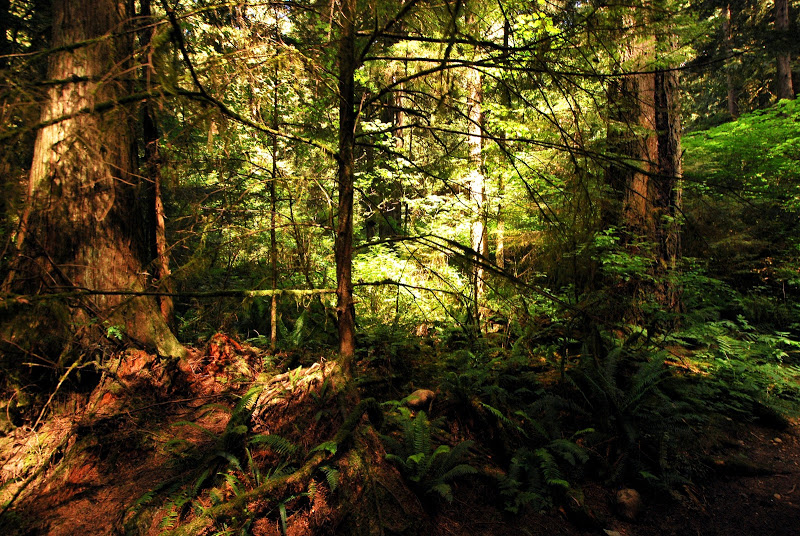 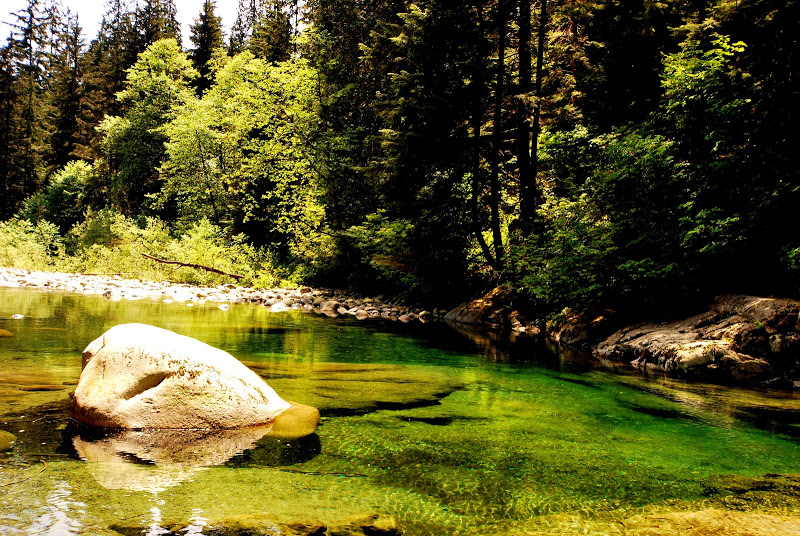 Day three – we walked a different section of the SeaWall to board an aquabus that took us to Granville Island- an old industrial hub that has been revived by local artists who set up their workshops in these factories. Weekends draw large crowds from the city. The tiny peninsula is animated with live music and fresh food at the large public market, accompanied by shopping unique finds at the artist workshops and boutiques. We picked up a few tchotkches and set forth to the piece-de-resistance of the day, the Museum of Anthropology by the Canadian modernist, Arthur Erickson. The museum is set in the large lush campus grounds of the University of British Columbia. The campus boasts of a good number of modern buildings but the museum was the jewel in the crown. The collection focuses on artefacts of the First Nation, the Canadian Aboriginals of the NorthWest Coast, though it has an extensive ethnographic collection of cultures from around the world. The strikingly modern building cleverly reinterprets the post-and-beam architecture of the First Nation people in concrete. Staggered concrete frames are spanned by vaulted skylights that filter natural light strategically into the museum spaces. The varying heights of the vaults along with a gentle slope in the floor, gradually expands the volume of the central exhibit area. The space culminates in a frameless glass wall that seamlessly merges into the outside. The outdoor landscape is marked by a reflecting pool and a few reconstructed Haida houses with signature totem poles acting as coordinates.  We were unable to do justice to the vast collection housed in the museum but it was really the architecture that was our main focus. It inspired, and humbled, leaving us in a contemplative state of mind. Like all good museums, the MoA has a great gift shop. We picked up some wonderful prints of modern reinterpretation of First Nation art by local artists. 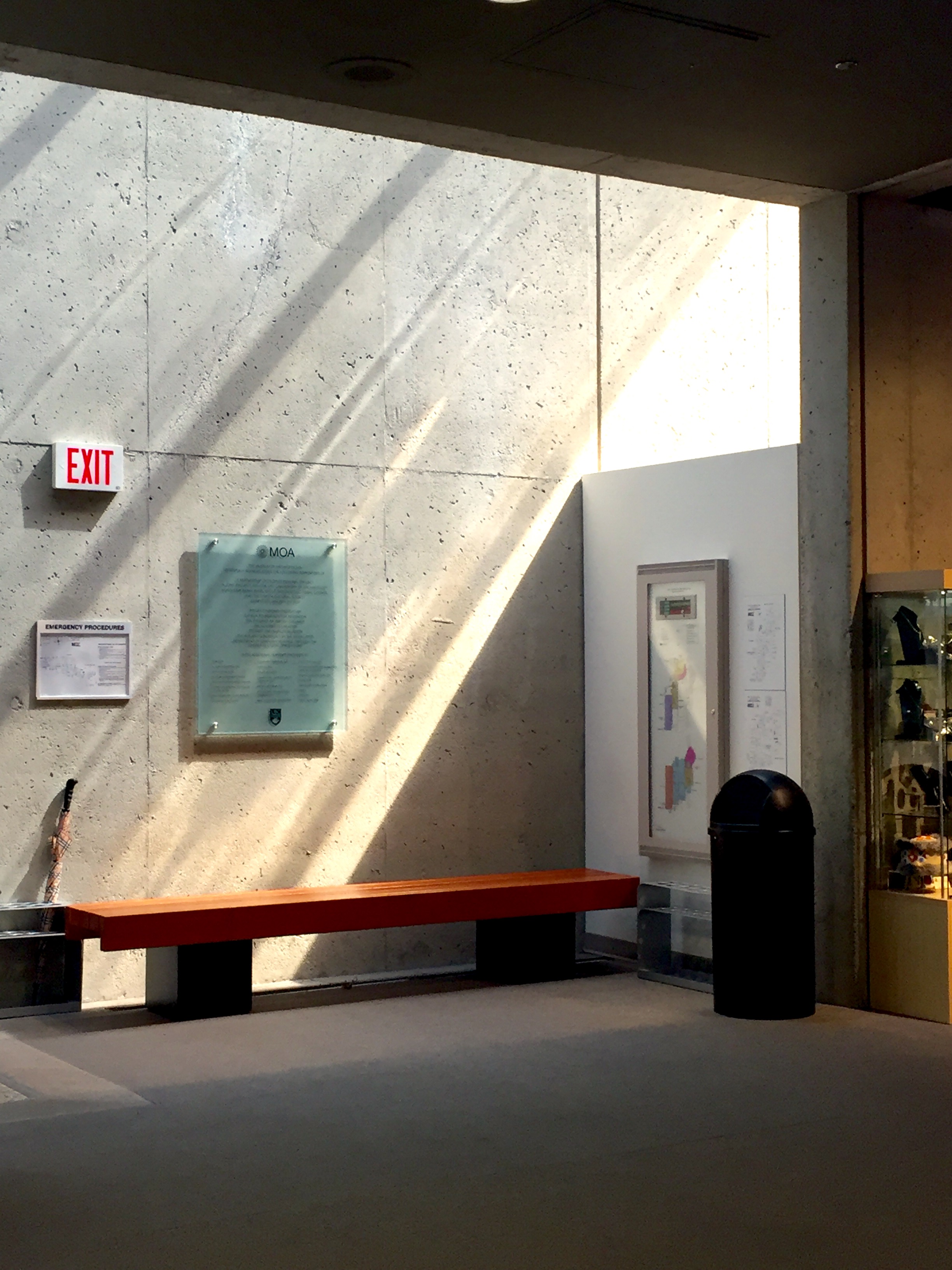 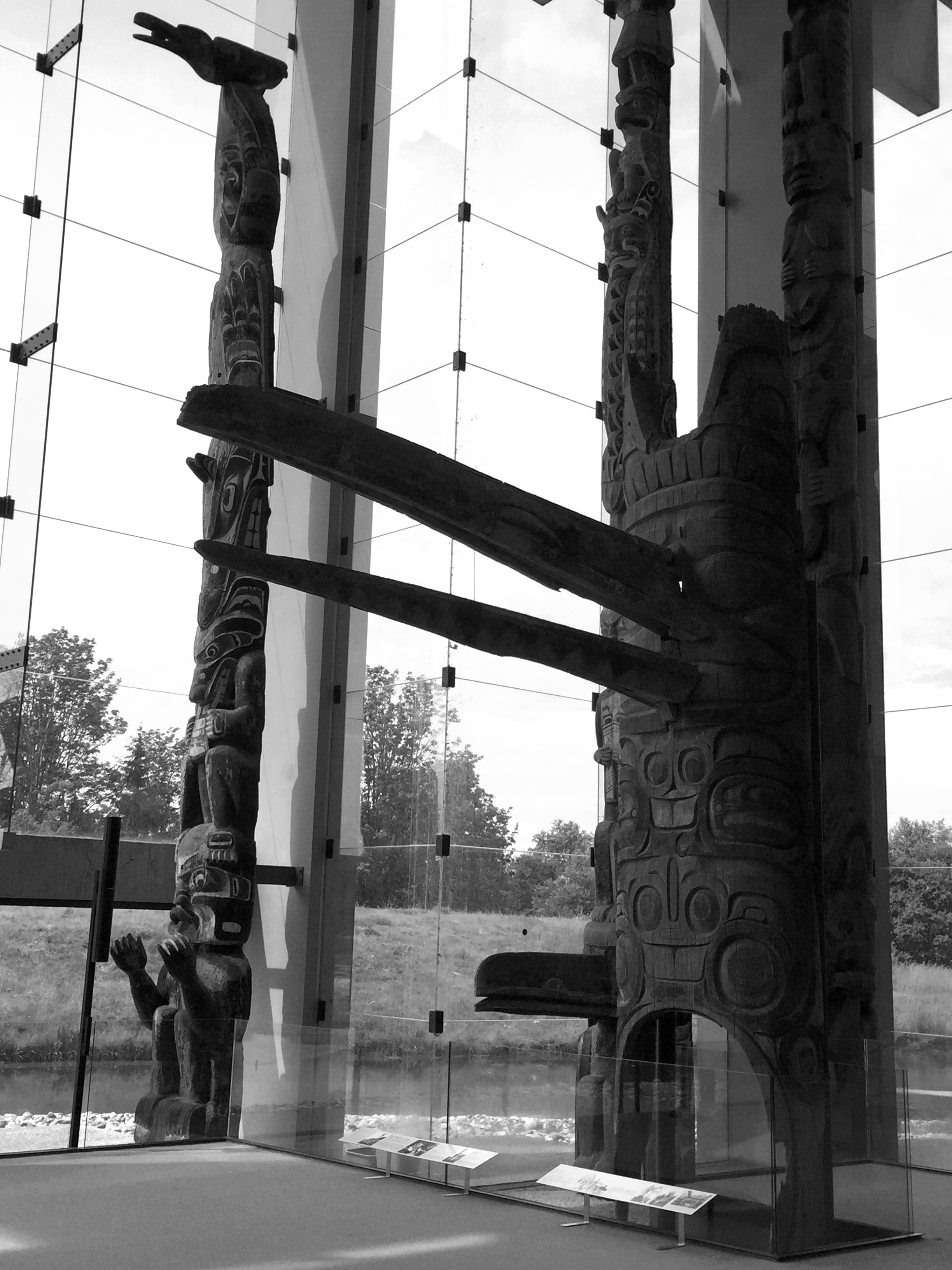 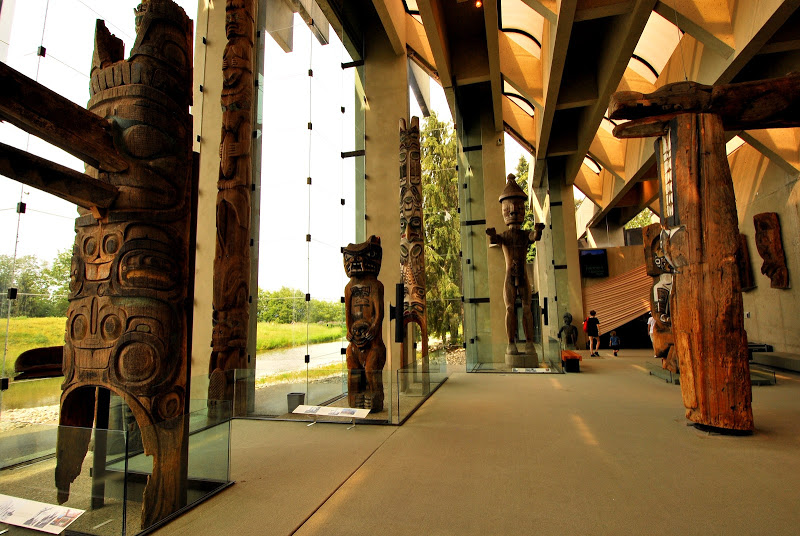 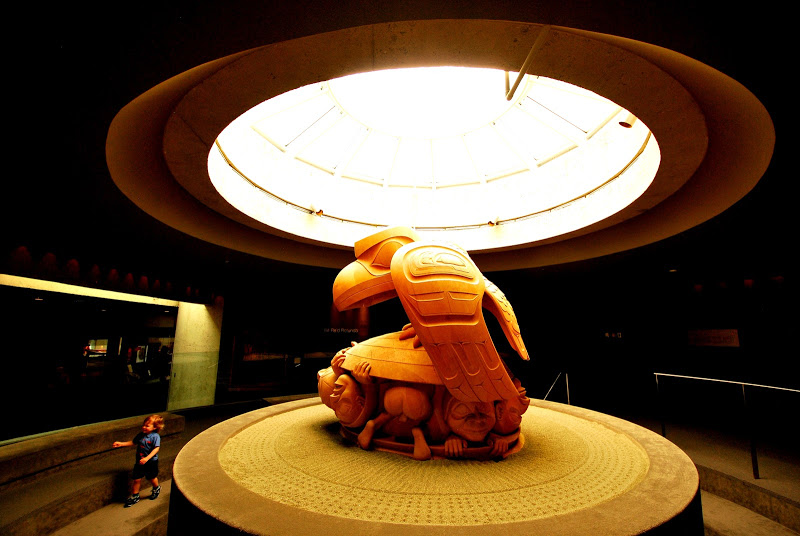 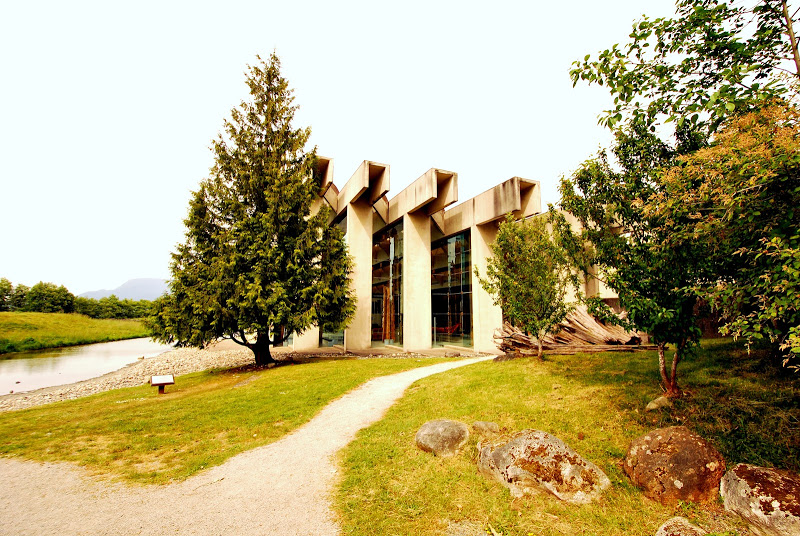 The mythology of the First Nation and their survival despite colonization and repeated pressures to assimilate, runs strong. At the MoA, we had discovered the works of Bill Reid, a true Renaissance man who drew from his Haida roots as a sculptor, carver, goldsmith and artist. Reid was one of the pivotal figures that championed the cause of the First Nation people and gave their art legitimacy in modern history. Born to a mother who was a Haida, Bill immersed himself in their culture and became one of the leading artists of his time. We knew we had to make time to visit the Bill Reid Gallery set right in Downtown Vancouver. The next day, we chose to skip the larger Vancouver Art Gallery and visit this tiny gem instead. Tucked away in the bustling downtown neighborhood, this building though surrounded by high-rises doesn’t get dwarfed. Well-proportioned and thoughtfully detailed, the gallery is carefully curated with permanent exhibits by Bill and a few by his protégés. The silver and gold jewelry display by Reid are spectacular. The gift shop offers a varied collection of original aboriginal art. We couldn’t be happier with our decision to visit here on our last day. It felt like an appropriate homage to conclude our first venture into British Columbia. 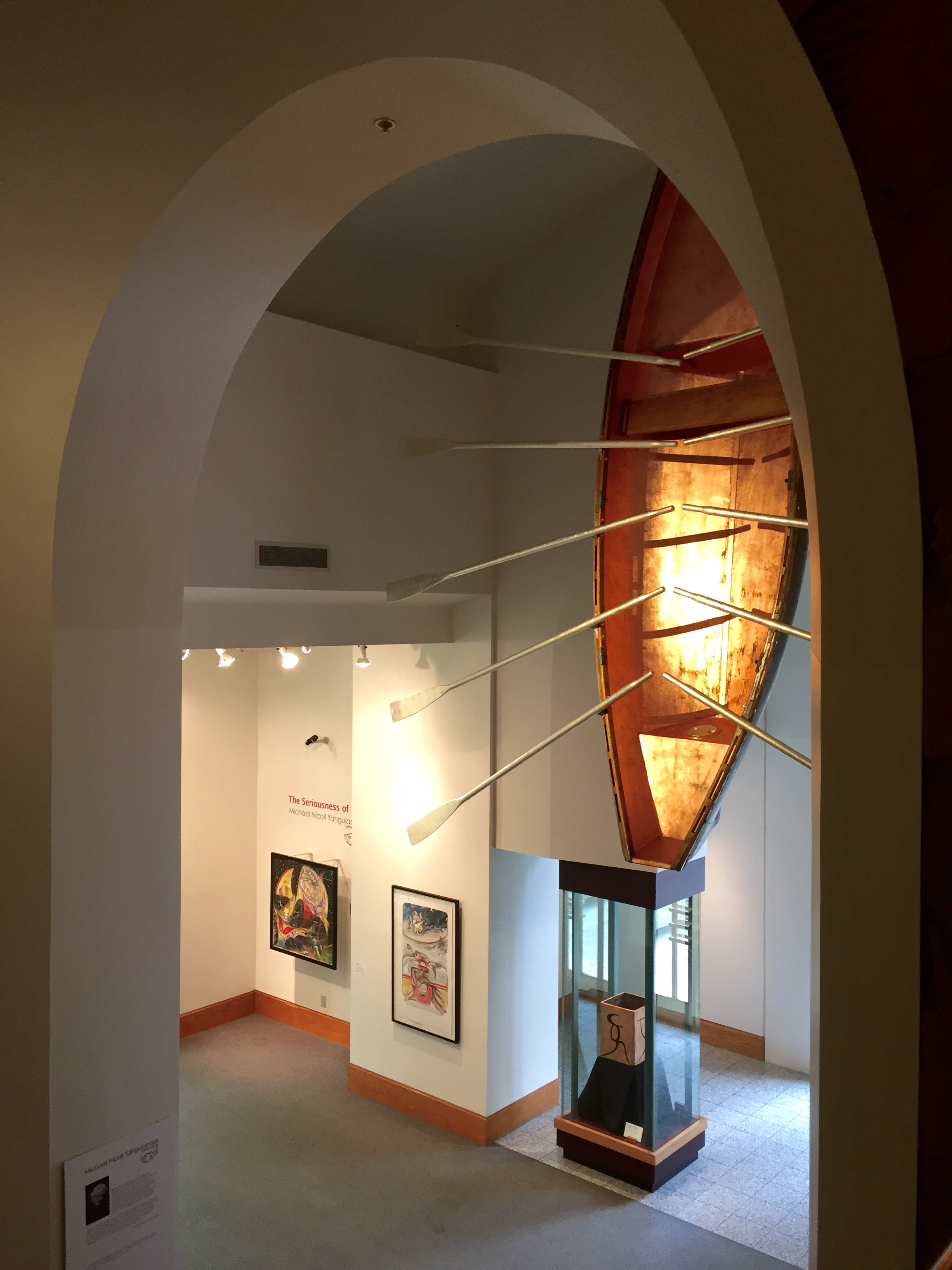 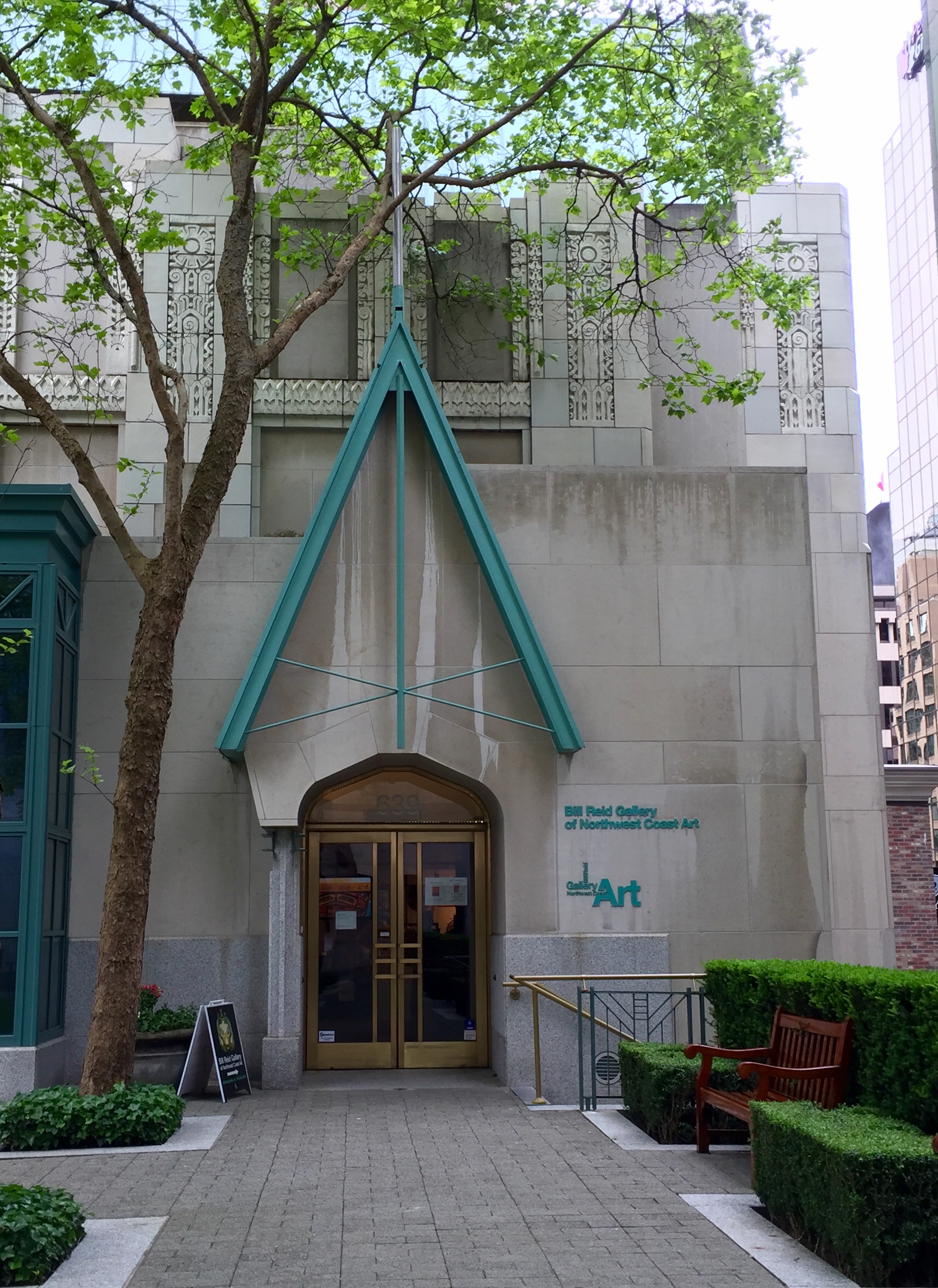 In a little over three days, we had gained some insights into the story of the First Nation people and into the cosmopolitan urban pulse of Vancouver, it’s most populous and popular city today. As someone born and raised in India, there was a comfortable familiarity with Vancouver’s British influences- be it describing temperature in degree Celsius, distances in kilometers or getting a ‘bill’ at the end of a meal 😉 We explored the nightlife on our last night. No vacation of ours is quite complete without a sampling of the local music scene. Gastown was perfect for our quest. We walked the streets exploring a few bars and clubs. We settled on one which had a live jazz session. It was evidently a neighborhood haunt as the regulars seemed to know each other. It wasn’t touristy. We had lucked out with warm sunny days for our entire vacation concluding with a smattering of rain as we made our exit. This was a fun trip- a teaser that had whetted our appetite for more. We knew we would be back…soon. – Anjali